Laudato Si’ meaning “praise be to you” is the title Pope Francis chose for his encyclical on the environment. In this section of his apostolic letter, you can clearly see the Pope’s deep concern over the loss creatures who can no longer praise God because of extinction by our human actions. He asks us to look outside of our own everyday lives and to consider the truth of what environmental pollution, commercialism, and development means to the biodiversity of the world. 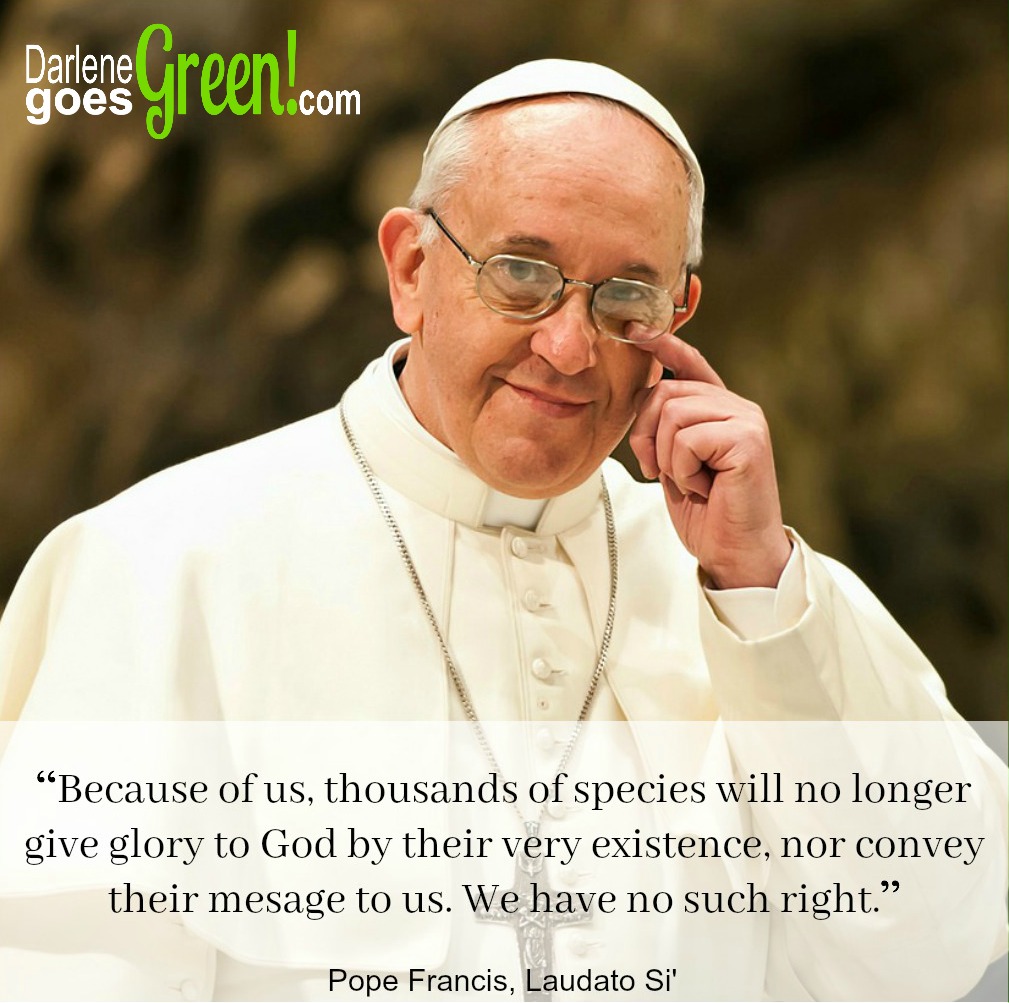 “Because of us, thousands of species will no longer give glory to God by their very existence, nor convey their message to us. We have no right.” –Pope Francis, Laudato Si’

To start (paragraph 32), Pope Francis tells us why he feels there is such a loss of biodiversity happening in our world. “The earth’s resources are also being plundered because of short-sighted approaches to the economy, commerce and production.” Very directly, he blames human disruption for the loss of species and expresses concerns that the loss might cause us harm in the future as we destroy resources that might be needed to find cures for diseases and other un-yet discovered scientific breakthroughs for humans and the environment.

Then as a good shepherd, in the very next statement tells us that “it is not enough, however, to think of different species merely as potential “resources” to be exploited, while overlooking the fact that they have value in themselves.” Their value lies in their creation by God and that we do not have the right to cause their extinction and take away their ability to live their purpose and give glory to God, simply by their existence. (Paragraph 33.)

From here, Pope Francis dives deeper into his concern and expresses that we should not only be concerned about the loss of visible species, but also the less visible groups including fungi, algae and microorganisms which have very important roles in an ecosystem. He expresses that although people feel compelled to take action to preserve creatures when they are in danger of serious extinction, he believes that the interventions being used are not only becoming more frequent, but our actions themselves also causes new problems and risks to the environment. “Human intervention to resolve a problem further aggravates the situation.” (Paragraph 34) 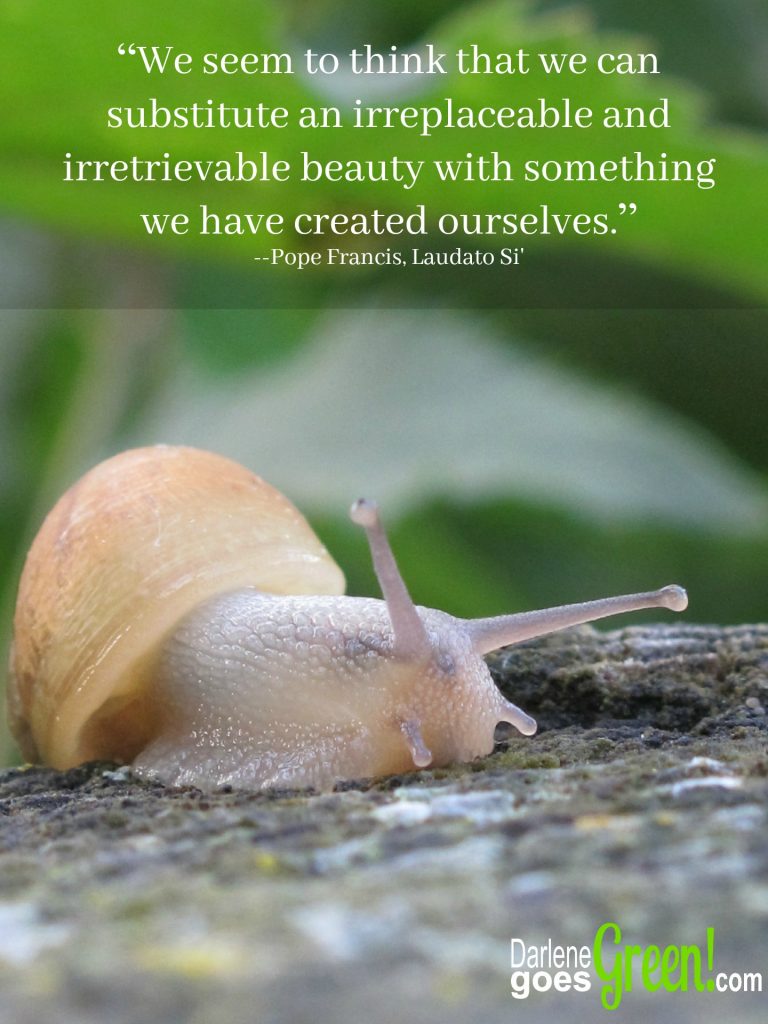 “We seem to think that we can substitute an irreplaceable and irretrievable beauty with something which we have created ourselves” –Pope Francis, Laudato Si’

In paragraphs 35-36, he shares concern that although developers often consider soil, water and air pollution when planning projects, they put very little effort into the “bigger picture” that could destroy habitats and interrupt migration and reproduction habits of the creatures that live there. All of these things can lead to the loss of species and “caring for ecosystems demands far-sightedness, since no one looking for quick and easy profit is truly interested in their preservation.” He admonishes developers in this section using words like “selfish lack of concern” and “terrible injustices” to describe those who exploit nature for economic benefits.

“We can be silent witnesses to terrible injustices if we think that we can obtain significant benefits by making the rest of humanity, present and future, pay the extremely high costs of environmental deterioration.” –Pope Francis, Laudato Si’

This appears to be very troubling area for Pope Francis as he dedicates an additional five paragraphs (almost two full pages, paragraphs 37-41) to more detailed examples of human participation in the loss of biodiversity. He asks us to consider more closely the damage to the Amazon and Congo basins, the great aquifers and glaciers, the world’s oceans and tropical and subtropical seas. In these areas and more, he shows concern over global economic interests, the destruction and single-crop replacement of virgin forests, selective fishing and dumping, the loss of coral reefs and all of the human actions that cause their ruin.

In the midst of all of his criticism, he does herald a couple of national actions for creating things like biological corridors (which provide connection between ecosystems and habitats to preserve ecological progress) and sanctuaries that block all human interference that might damage their natural order. These preservations, he says can lessen the impact of development, but “few countries demonstrate such concern or foresight.” (Paragraphs 35 & 37)

To conclude his section on biodiversity (paragraph 42), he offers us some necessary actions:

Our Pope appears very troubled over the loss of creatures who by living out their purpose in life bring beauty and glory to God. As part of this nature and part of Christ’s body, what can we do preserve life and give him praise and glory?

What Does It Mean for You and Me?

For us as Christians the loss of biodiversity should be very concerning. Our ecosystems are being disrupted and more and more of God’s creatures are becoming extinct by our human actions. Maybe not through our personal and direct human actions, unless we hold positions of power and/or influence, but by our lack of effort to preserve and protect these creatures. Our lack of concern and lack of movement against the actions that bring about the damage and destruction of ecosystems is the root cause of the loss of biodiversity. For you and me, it means that we need to make the loss of biodiversity our personal concern and take the time and effort needed to think about what we can do about such a big picture problem.

How Can We Make a Difference?

It seems with every “how can we make a difference” section of this study, it always comes down to our choices. We can make a difference by changing our hearts and our minds to look outside of ourselves and put others first. In this case, others being animals and creatures that cannot protect themselves from human development, commercialism, and pollution.

Almost all of this blog is centered around how we can positively impact the environment with our everyday actions and choices. When we look deeper into the problems discussed here, much of this damage is being done outside of our personal control, but that doesn’t mean we don’t have influence.

We can make a difference by:

Local biodiversity and world-wide biodiversity is impacted by our decisions. Who’s with me on trying all 52 habit-changing tips from the European Commission as a challenge?

As our series continues, next time we will look at the section of Laudato Si’ titled, “Decline in the Quality of Human Life and the Breakdown of Society.” In the mean time, if you’ve missed any of the posts in this series, you can see them all at the Laudato Si’ series page here. 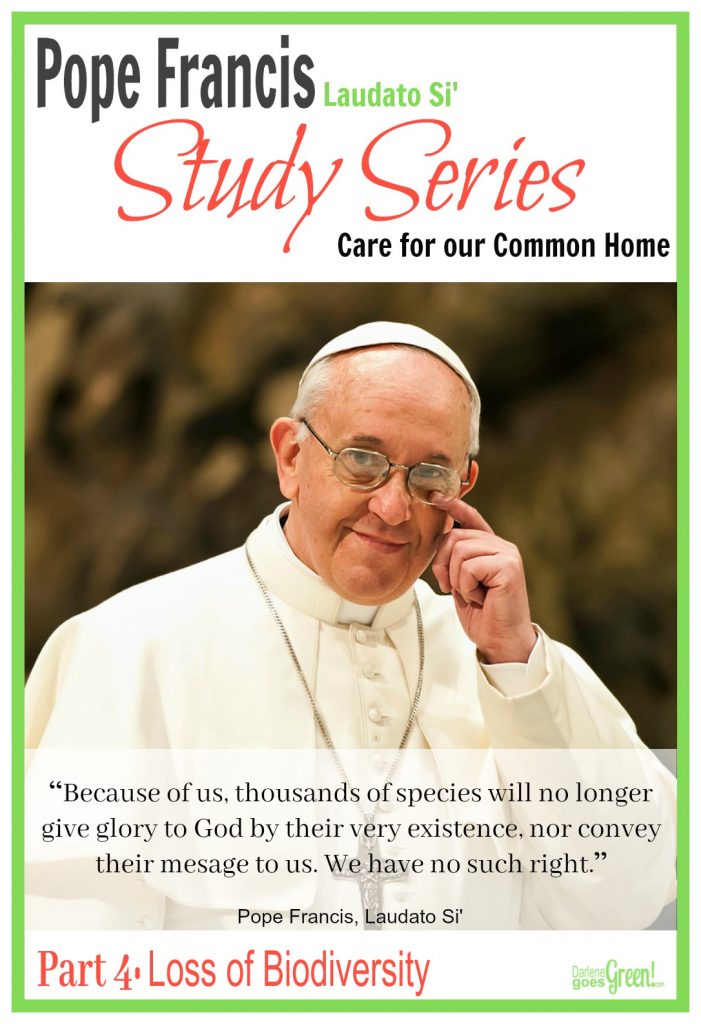 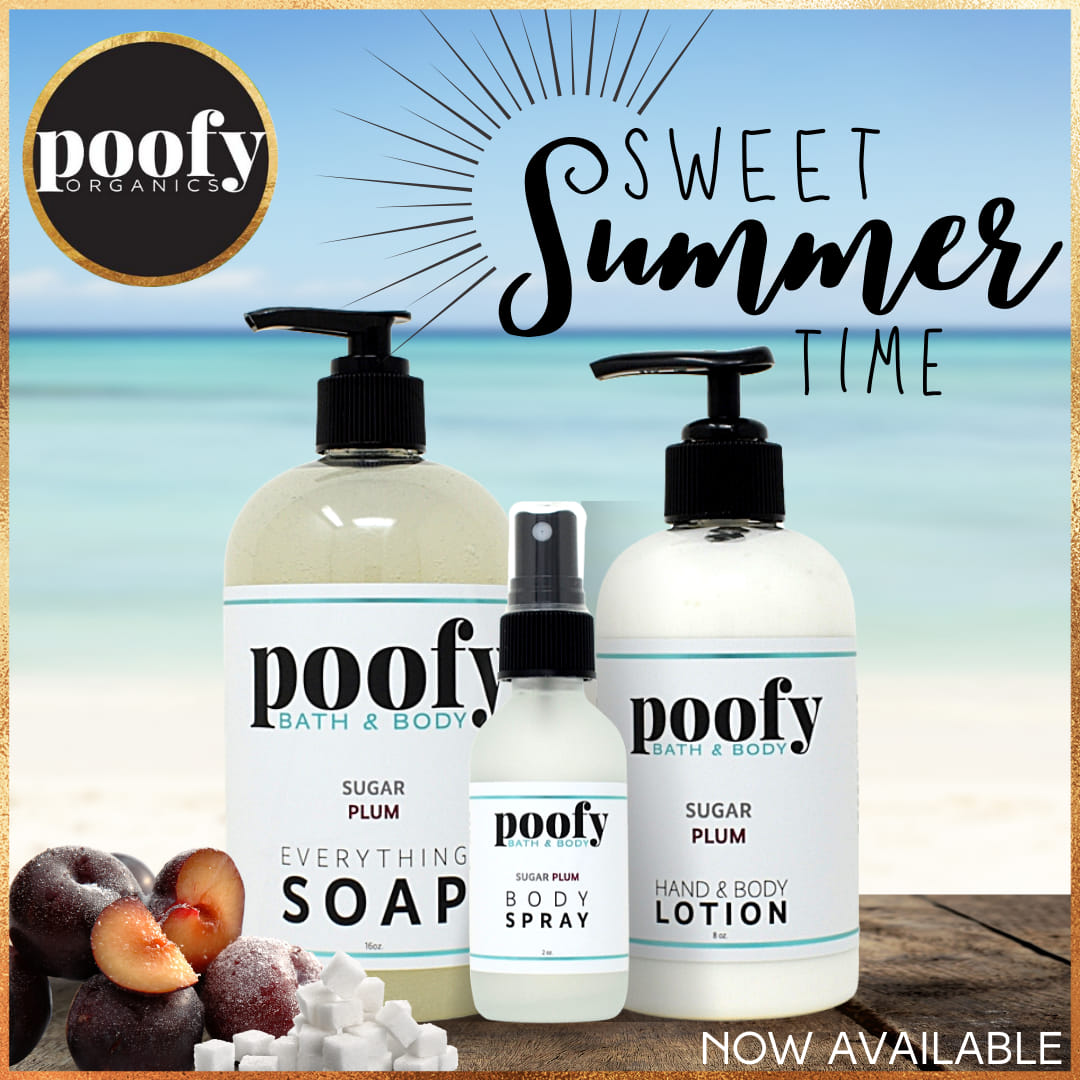